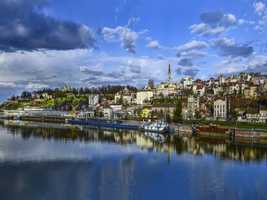 The capital of Serbia is a bustling metropolis inhabited by 1.8 million people and known for an easy going and friendly atmosphere and sparkling nightlife. It is located at the confluence of the Sava and Danube rivers, where the Pannonian Plain meets the Balkans. One of the most important prehistoric cultures of Europe, the Vinča culture, evolved within the Belgrade area in the 6th millennium BC. Belgrade hosts many annual international cultural events, including the Film Festival, Theatre Festival, Summer Festival, Music Festival, Book Fair, Eurovision Song Contest 2008, and the Beer Fest. Knez Mihailova Street, properly Kneza Mihaila is the main pedestrian and shopping zone in Belgrade and is protected by law as one of the oldest and most valuable landmarks of the city. Named after Mihailo Obrenović III, Prince of Serbia, it features a number of buildings and mansions built during the late 1870s. The Church of Saint Sava is a Serbian Orthodox church located on the Vračar plateau in Belgrade. It is one of the largest Orthodox churches in the world and ranks among the largest church buildings in the world. The church is dedicated to Saint Sava, the founder of the Serbian Orthodox Church and an important figure in medieval Serbia. It is built on the Vračar plateau, on the location where his remains were burned in 1595 by Ottoman Grand Vizier Sinan Pasha. From its location, it dominates Belgrade's cityscape and is perhaps the most monumental building in the city. Belgrade Fortress consists of the old citadel (Upper and Lower Town) and Kalemegdan Park on the confluence of the River Sava and Danube, in an urban area of modern Belgrade, the capital of Serbia. It is located in Belgrade's municipality of Stari Grad. Belgrade Fortress was declared a Monument of Culture of Exceptional Importance in 1979 and is protected by the Republic of Serbia. It is the most visited tourist attraction in Belgrade, with Skadarlija being the second. There are many museums to visit in Belgrade, but one of the first is certainly the National Museum. Foreign and domestic tourists are especially interested in the Nikola Tesla museum that keeps the story of the life and work of a famous scientist. In addition to the Museum of Contemporary Art, the Museum of Theater Art, Car Museum and many others are also interesting.
Show more