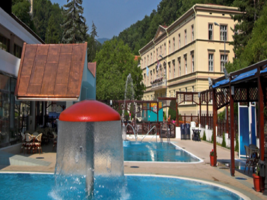 Ribarska spa is considered one of the most healing spas of Serbia. It is located in central Serbia, near the city of Krusevac. The spa’s healing sources were used in times of Romans. The name originates from the fact that during the 14th century, from period of Prince Lazar, people used to fish trout in this area. However, the one who contributed the most to this spa is Petar I Karadjordjevic, who ceremonially opened it in the 20th century. Since then, the spa got famous as a rheumatism hospital until today. Grateful locals erected him a natural size monument. The spa is also called royal because many members of the royal family came to it for healing and treatment. Medical waters of this spa help in curing orthopedic, bone and degenerative diseases, and over time, spa-programs have been developed to preserve health. Besides the medical waters, it is also known for the medical herbs that can be found in the surroundings. This spa is not only famous for its medical factors but also for the numerous manifestations and festivals that are held in it. One of those is the Ethno festival of food, music and old crafts, which shows and nurtures Serbian tradition. For those who love to hunt, there is a special manifestation called Hail to the wolf, where on organized hunting grounds people go hunting for wolfs and foxes. The lovers of the novel Anna Karenina might be interested in the fact that in the monastery Djunis, that is located not far from the spa, Alexei Vronsky is buried, the man who inspired the same named character in the Tolstoy’s book. A visit to this spa is not only great for the health, but also a great vacation for the soul.
Show more