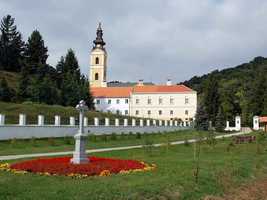 Fruška Gora is a mountain in northern Srem. The mountain is a natural geological phenomenon as it is built from the rocks from almost all geological periods. It used to be an island during the existence of the Pannonian Sea. To the north, the mountain is bordered by the Danube river, while to the south it descends into the Syrmian lowlands. A National Park Fruška Gora was declared in 1960 because of its richness of nature, animal and plant wildlife, thermal springs – spas, and lakes which altogether make the basis for tourism of special interest (hiking, cycling, rare plant and bird watching, fishing, hunting, camping), as well as for recreational and picnic programmes, schools in nature, nautical, health-spa/wellness tourism. Fruška Gora is also called Holy Mountain or Serbian Atos for it is home to 16 monasteries built between 16th and 18th century in styles of Baroque and Morava architectural school of medieval Serbia. Fruška Gora is the region of very good wines. There are three famous centers for wine production: Irig, Sremski Karlovci, and Šid. The slopes of Fruška Gora are perfectly suited for growing grapes so that’s why many wine-makers producing Traminer, Riesling and other wines are situated in the region.
Show more