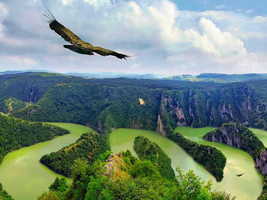 The Special Nature Reserve Uvac is one of the greatest natural treasure of Serbia. This area is of great importance, as it belongs in the first category of natural resources, and it is located in the southwest Serbian the area of Stara Vlah - Raška mountain range. The special value of the valley is specific entrenched meanders. These meanders became a trademark of the river Uvac and their images pretend to become a symbol of the natural resources of Serbia. Meanders of the river Uvac resemble a maze, and in some places turns at an angle of 270 degrees. The area of the natural reserve “Uvac” is widely known for its rich fauna, especially for the huge bird habitat which counts more about 130 bird species. One of the most important is the Griffon Vulture (Lat. Gyps fulvus) which represents one of the two remaining vulture species that nest on the territory of Serbia. This bird was protected by law in 1994, and so this unique bird’s colony has become the largest one on the Balkans and one of the largest in Europe. It should be noted that, in previous years, another two species of eagle vulture, that once inhabited this area, have returned. Special charm to this natural reserve gives the largest cave complex in the territory of Serbia. The cave system in the valley of Uvac is six thousand kilometers long. The cave system is characterized by canals in several levels, cave decorations, siphons, and halls.
Show more