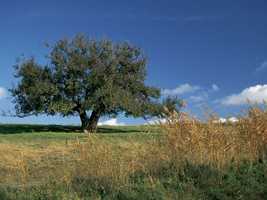 Geographically, Vojvodina is the opposite of the rest of Serbia - Serbia is as mountainous as Vojvodina is flat and Serbia is as flat as Vojvodina is mountainous. Apart from the low mountains of Fruška Gora and Vršačke Planine on the border with Romania, there is nothing to disturb the view over the endless plain, that used to be the bottom of the Pannonian Sea millions of years ago. today, only tractors and combines sail across this sea, fighting the wave of wheat or sunflowers. Standing out like islands on high seas are the bell towers of Orthodox, Catholic, Uniate, Evangelist or Calvinist churches or grain thanks that are never empty. Three great rivers flow through this region - the Danube, the Sava, and the Tisa - and divide it into three parts - Srem, Banat and Bačka. For a long time, these were different provinces until, in 1848, they united for the first time, as demanded by the Serbs living in all three of them. On this occasion, the newly established land of the Habsburg Empire was named "Srpska Vojvodina", that is "Serb Dukedom". Today, Vojvodina is an autonomous province within the Republic of Serbia with its own parliament and ministries as institutional protectors of its individuality. "Hurry at leisure" is a motto in these parts. The people, as if somewhat sleepy, do their work slowly but with certainty, knowing that the rich plain brings deserved rewards. This breadbasket of Serbia gives more than enough for all those who live here, and hence, all do live here: Serbs, Hungarians, Romanians, Slovaks, Ukrainians, Croats, Czechs and many more. They all come here in search of a better life and have learned to appreciate it. Vojvodina's beautiful cities are spattered with buildings dating back from the days of the Habsburg Monarchy. Though the Germans are gone, quite a bit of their efficiency and order has remained, achieved without tension or force. Situated on the wide banks of the Danube and shadowed by the mighty Petrovaradin Fortress, lies the city of Novi Sad, the administrative and cultural center of the province. Even though this is a relatively large city, the atmosphere here is relaxed, calming and inspiring at the same time. In the North is the city of Subotica that connects Serbia to Europe not only physically but also through its secessions architecture and active economy. Standing aside from the main roads is the beautiful Sombor, stepped in history and lush enjoys the leisurely pace of life. The town of Sremska Mitrovica called Sirmium in classical of the Roman Empire and gave the name to the entire province of Srem. Tucked in between the Danube and the hills of Fruška Gora, lies the town of Sremski Karlovci, the spiritual center of the Serbs for many centuries, but also one of the centers of European viticulture. Another town which grew up beside the vineyards is Vršac with its low, yet wild mountains. Today, only bogs and swamps remain of the Vojvodina's landscapes before the land drainages that were the main preoccupation of the state authorities until the beginning of the 20th c. However, this scenery from a time gone by, with its incredible richness in flora and fauna, can be enjoyed in a place like Carska bara, Obedsk bara or Gornje Podunavlje wildlife reserves. There are many events that celebrate the ethnic and cultural diversity of the nations of Vojvodina. These happenings honor the adundance of nature and the enthusiasm of the inhabitants who, after all, love most of all to enjoy the fruits of their work with food, drink and song.
Show more