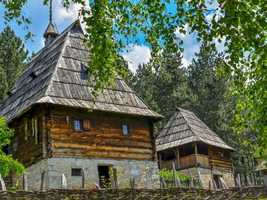 Zlatibor is a tableland 25 km south from Užice, with a settlement of the same name being the center of this touristy region. Known for its exquisite landscapes and clean air, Zlatibor has an in last two decades developed into a leading mountain resort of Serbia, orientated mostly at families. However, with urbanization, commercialization, and popularization, Zlatibor lost much of its purity and many people who come here now barely leave the boomtown. The center of the town is next to a small lake - a swimming place in summer and skating rink in winter. By the lake, there are lined up wooden kiosks with shops, cafes and restaurants, and at the other end in the town bus station and the marketplace. Zlatibor offers remarkable conditions for a variety of walks, from those quite easy to serious hiking ventures. The least strenuous walk is to Šumatno brdo, where you can find a monument to the victims of the German retaliation in 1941. The highest peak of Zlatibor, Tornik (1.496 m), rises above the lake, covered with coniferous forests. A ski center is at the foot of the mountain, with two ski lifts frequently used in winter. Stopića pećina, the nicest of caves that abound in this area. Of the cave's total 1.651 m length, tourists get to see a mere 250 m. But a remarkably beautiful 250 meters with the impressive entrance, the stream Trnavski potok flowing through it and the exquisite travertine tubs whose number, size and depth of up to seven meters are unparalleled in the region. Sirogojno village, the whole complex is today known as the Open-Air Museum "The Old Village". It consists of some fifty buildings that evoke life from the previous centuries of this part of Serbia. The houses you see here are specific for a good deal of the Dinaric Alšs region stretching over the whole Bosnia and a substantial part of Croatia, which is inhibited to a large extent by the Serbs. Some 12 km more to south from Sirogojno is Gostilje, known for rural tourism and even more for its impressive waterfall on river Katušnica, after which comes a shorter footpath following its banks. The village also has a small camp and a trout farm.
Show more