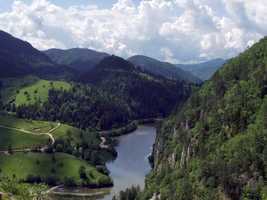 A perfect mix of stunning nature, wilderness and good tourist infrastructure makes Tara one of the most beloved destinations for nature lovers. The National Park is named after Mt Tara which forms its central part but its territory encompasses also the Zvijezdara Mountain to the west - forming the border with Bosnia and Hercegovina - as well as the deep valley between the two, formed by the River Derventa. Mount Tara rises abruptly above Drina River up to roughly 1,100m. Tourist facilities are grouped in three locations. To the east is Kaludjerske bare, the centre of tourism on the mountain. In the middle of the park lies Mitrovac with a new visitors' center where you can obtain all the info needed, the children recreational center and a hunters' lodge. At the western end of the NP, at Predov krst, lies an isolated group of objects. Tara is known to be very rich in water: many springs make streams and rivers that run down to the Drina, creating several waterfalls, the best known being Skakavac and Ladjevac to the north of Kaludjerske bare. Of special interest is the Serbian spruce, a rare endemic species, discovered in 1871 by a well-known Serbian naturalist Josif Pančić.
Show more