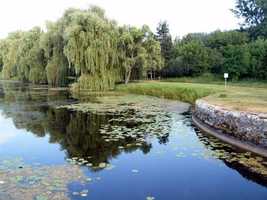 Bezdan is a village located in Bačka, Vojvodina, Serbia. It is situated in the Sombor municipality, West Bačka District. t was first mentioned in 1305 under the name of Battyan, while in 1341 it was mentioned as Betsan. The village was destroyed during an Ottoman invasion in the 16th century. With the establishment of Habsburg rule, the village was settled by Hungarians, Poles, Czechs, and Germans. The first church in the village was built in 1755, and the current one was constructed in 1846. Weaving workshop for silk damask "Novitet-Dunav" is set some 15 kilometars north-west from Sombor in the village of Bezdan known for hunting tourism, but far more known from weaving of silk damask. Bezdan Spa is the mineral water is categorized as an alkaline sodium hydrocarbon spa with healing waters rich in iodine with the average temperature pf 26-37C. It is suitable for healing various rheumatic and orthopedic ailments. The Chapel of Holy Trinity represents the oldest preserved monument in Vojvodina built by the common man. It was erected between 1710 and 1720.
Show more