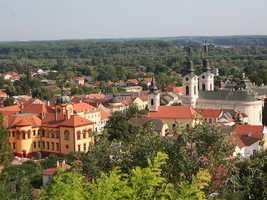 Sremski Karlovci is a small town on the right bank of the Danube, 12 km from Novi Sad and 9 km from Petrovaradin on the old road to Belgrade.   The city was first mentioned in 1308 as a fortress called Karom, erected on Roman foundations. The Ottoman military leader Bali-bey occupied this post in 1521. It will remain under Turkish rule for the next 170 years. From 16th November 1698 to 26th February 1699 a congress was held in Karlovci to mark the end of hostilities between the Ottoman Empire and the Holy League (coalitions of Austria, Poland, and the Venetian Republic). Turkey also has signed a special peace agreement with Russia. This arrangement is known as the Peace of Karlovac. By this agreement, the Karlovci became part of the Habsburg estates under the name Military Frontier. At the place where peace had been signed the chapel was erected dedicated to Lady of Peace. After 1699 this city became a significant trade settlement because trade routes to Turkey are directed through the place. The proximity of the Danube has certainly contributed to the further development of trade. Today, the place is an extremely important tourist destination because of the numerous cultural and historical sites, but also because of the wineries that produce famous Karlovac wines.
Show more