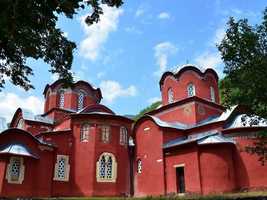 The natural values of Kosovo represent quality tourism resources. The description of Kosovo's potential in tourism is closely related to its geographical location, in the center of the Balkan Peninsula in Southeastern Europe. It represents a crossroads which historically dates back to the classical times. Kosovo serves as a link in the connection between Central and Southern Europe, the Adriatic Sea and the Black Sea. The mountainous west and southeast of Kosovo have great potential for winter tourism. Skiing takes place at the winter resort of Brezovica within the Šar Mountains. The plain of Kosovo north of regional capital Priština gave the name to the whole region. This is where the legendary battle took place in 1389 making it the cornerstone of Serbian epic poetry. The mountains surrounding it are rich in ore: Novo Brdo was the largest silver mine in Europe until its fall to the Turks in 1455. Today, ruins, though impressive, are all that remain above the small village of the same name. Metohija gots its name from the large monastic estates that were granted by the Nemanjić rulers in this fertile region. Kosovo and Metohija are also known for its numerous cultural-historical monuments, above all monasteries under the protection of UNESCO. The village of Gračanica the center of a Serb enclave of a dozen villages lies just 10 km southeast of Priština. A monastery of the same name, one of the finest examples of Byzantine architecture in the world, is situated in the village. The present-day church of the monastery complex was built by King Milutin on the site of an earlier one. The Pećka Patrijaršija is one of the most important Serbian monasteries. For centuries this was the seat Serb orthodox patriarch and as such, it still holds a special place in the hierarchical order of the Serb Orthodox Church as its ceremonial seat. Thus it is customary for every Serbian patriarch to be ceremonially enthroned here. The monastery complex is elaborate and treasures beautiful art pieces. The magnificent monastery of Visoki Dečani is the largest and best-preserved monastery in Serbia. Its unique and stunning architecture and excellently preserved ensemble of frescoes have been the key factors that made it a UNESCO world heritage site.
Show more