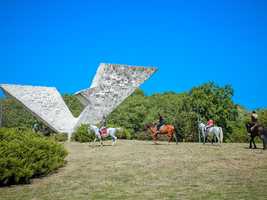 One of the biggest cities, located in the center of Sumadija, the region in the heart of Serbia. It is big enough to have many attractions to see, yet small enough that its soul can’t get lost in the infinity streets and people in them. This city was one of the big actors in Serbian modern history. Kragujevac was the first capital of modern Serbia and it was both a witness and a host for the numerous historical events like the passing of Sretenje Constitution and announcements of the order of the Berlin Congress. Attractions to visit are exactly from that period: Amidza Konak, building from the 18th century, and one saved installation from the palace of Prince Milos. There is also an Old Church, in which all the important decisions for the Serbian people had been announced when the modern state was in the making. The most known one took place on 14th of February in 1835. when the first Serbian Constitution was accepted in Kragujevac state assembly. The building of the old assembly is also significant – the first announcements that Serbia got full independence from the decision of Congress of Berlin came from there. We shouldn’t forget the Gymnasium, one of the oldest in Serbia that has the most amazing architectural beauty. Right in this gymnasium, during the Second World War, the most tragic event happened to this city – 7000 inhabitants were shot, among them students of the gymnasium. Today, as a memorial to this event, there is a memorial class in the gymnasium, from which the Germans took students. Another location that shouldn’t be missed is the memorial park “Kragujevacki Octobar”. This memorial complex has a set of artworks that were done in honor of all the victims of the tragic 21st of October 1941.
Show more