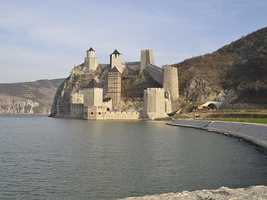 Golubac is a town in eastern Serbia on the border with Romania, only separated by the Danube River. It is 50 km east of Pozarevac and 130 km from the capital Belgrade. Until the XIX century, the main historical center of the whole region was the famous Golubac Fortress. At the end of the XIX century, Golubac becomes a small town. When in 1972. a Djerdap Lake was formed, Golubac was the first upstream settlement of the hydroelectric power plant, which was not displaced by raising the Danube level. However, the lower parts of the coast, such as the sports fields along the Danube River were irreversibly submerged. But, this didn’t hinder the development of Golubac during the second half of the XX century, when the city gets several industrial plants in the eastern part and more administrative buildings in the city center. Of great importance for the tourism was the construction of the large hotel "Golubac Town“ and the complete restoration of the Fortress, which was completed in spring 2019.
Show more