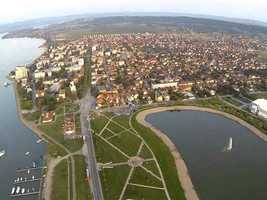 Kladovo is a small town opposite the much larger Romanian port of Drobeta Turnu Severin. It is the first town one encounters after leaving the constrictions of Djerdap Gorge and a good place to relax after the excitements of the gorge, enjoying the benevolent side of nature. Your first stop in Kladovo should be the Fetislam fort on the western edge of the town. The quadrangular inner walls with four round towers were erected by the Ottomans in 1524 tracing the shape of the Roman castrum that used to be here. It was extensively rebuilt following the Habsburg takeover in 1718. After the fort came back under Ottoman control it was named Feth-ul-Islam. "The Rampart of the Faith". On the three outer gates, you can see inscriptions in Arabic commemorating the forts retaking, one of them stating: "The protector of the faith and country repaired the Fetislam Fortress. This sublime shah, the conqueror of the whole world, Shah Mahmud, is equal to Alexander." Fetislam remained in Turkish hands until 1867 when it was handed over to Serbia. Today sands in a pitiful state, inspirational only to the adventurous and lovers of art photography. In the town itself, the Djerdap Archeology Museum showcases the artifacts from the archeological excavations in Iron Gates Gorge, by the large from prehistory and the Roman era. In the heat of the summer young and old flock to the nicely arranged sand beach on the Danube that - complete whit straw parasols, showers, and scanning cabins - makes a perfect place to relax with a long cold drink.
Show more