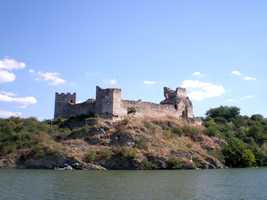 This fortress, situated on the far east of Serbia, on Danube, represents the strongest connection between Balkans, Pannonia and Carpathians, but also the biggest crossroad between land and waterways. You can reach Ram from both the river and land. If you decide to reach it from the river, you won't be disappointed because you'll see a beautiful sight from the port: restaurant and a house in stone on the left side, and on the right side, high up is the magnificent and proud fortress Ram. Because of the widening of the Danube on that spot, everything reminds us of a fortress on the seaside. The Ottomans built it in the 15th century to strengthen the border between Smederevo and Golubac from the Hungarian attacks. As the empire was spreading its territory to the north, the fortress was slowly losing its importance. Besides the Ottomans, numerous prehistoric cultures left their trace on Ram: Tribal, Celts, Romans and later Serbs, Byzantines and Hungarians – as evidence show by countless archeological remains. The romantic look of this fortress, when you come from the river, can deceive because it is actually an object typically designed for military defense. In fact, there are five towers and each contains a hole for the cannon. Therefore, this is a real military architectural style. Nevertheless, this fortress also has a romantic side – the unrealistic view of the undisturbed Danube, which is the most beautiful during the sunset. Then it all seems like the sun is merging with the river, so Rams Fortress will shortly throw you into the feeling that you are on the Mediterranean. Only a hundred meters from the fortress is the Caravanserai, once a place where people traded and around which the present Ram settlement was developed. Today it is a place of prayer for the local population because it contains a church.
Show more