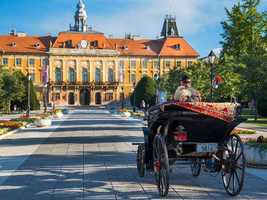 Sombor is a city of rich cultural heritage, the guardian of the old tradition and charm of the past in which many artists and poets found their peace and in which they created their most prominent works. This city, located in the northwest of the tame Backa plain, is widely known for its greenery, more precisely for the bodjos that were brought from the Mississippi Valley more than 100 years ago, and rightly bears the epithet of the greenest city in the country. We should not forget the old carriages that still "wander the streets of the city", maintaining the tradition of the past. Named Saint Michael or Sentmihalj, the forerunner of today's Sombor was first written at the end of the 14th century. In 1541, the settlement was annexed to the Ottoman Empire, and two years later it was first mentioned under the name Sombor. After almost 150 years under Turkish rule, Sombor became part of the Austrian Empire as a border town. The accelerated development of the city took place after obtaining the status of the Free Royal City in the middle of the 18th century. Palaces, churches, the City Hall, schools, reading rooms, libraries are being built, monuments are being erected. Sombor experienced further prosperity and became a significant cultural seat at the time when it became the seat of Bačko-Bodroška County, which included the cities of Novi Sad and Subotica.
Show more