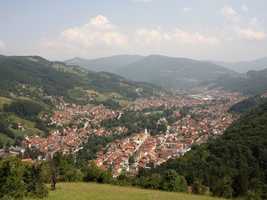 Ivanjica is located in the Moravica district of southwestern Serbia, which is a true paradise for all lovers of untouched nature. Exactly half of Ivanjica municipality occupies a mountain of gorgeous beauty - Golija. This region is famous and rich in various fruits and forests. Rural tourism has been developing here for decades, and there are also numerous manifestations - from cultural ones, such as the famous Nusicijada (festival of humor and joy) dedicated to the most famous Serbian comediographer Branislav Nusic, to those unusual, such as Moto meeting or Chase of the wolf on Golija. It's interesting that the city of Ivanjica was formed after the departure of the Turks, when innumerable important objects of this city were built, which still exist today. Among the old buildings there is also Kusic han, the former inn. Adjoining this building is nothing less than the interesting monument of the most important personality of Serbian history - Draza Mihailovic, who was born in Ivanjica. He was a Yugoslav Serb general during World War II. He organized bands of guerrillas known as the Chetnik Detachments of the Yugoslav Army. One of the first hydro power plants of Serbia is located in this city. Although Ivanjica had only two hundred houses at that time, there was no obstacle for it to be among the first lighted up cities. Today this hydroelectric plant is a kind of museum. As a hydroelectric dam, there is also a waterfall on the river Moravica, which more resembles a real tourist attraction than something that has a practical purpose. If you visit outside the city, you will find countless treasury of monasteries and churches, but also one unusual bridge – the Roman Bridge. A specific about the bridge is that, according to estimates, it was built during the time of Uros Nemanjic and has nothing to do with the Roman age. In fact, Uros Nemanjic was part of the most important dynasty of Serbia in the Middle Ages and lived in 13th century. Nevertheless, one glance of this bridge will leave you speechless - it looks tremendous and is surrounded by lush greenery. There are many more attractions in Ivanjica - numerous natural and cultural treasures, and many stories that are waiting to be discovered.
Show more