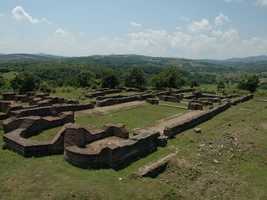 Lebane is a city located in the Jablanica district. This small town is pleasant for walking and recreation, and also there is a cultural-historical monument nearby - Caričin grad. Anyone who visits this city at the confluence of Šumanka in Jablanica will enjoy the natural environment, but should also see a significant cultural and historical monument Caričin grad. Seven kilometers from Lebane, this is a cultural and historical building that forms the remains of the Byzantine city of Justinian Prima. The whole city was built by Justinian the first, and in addition to the Caričin grad, archaeologists have found the remains of settlements that can be the oldest in the Balkans as experts are convinced that it existed eight thousand years ago. In addition to these interesting archaeological and historical sites, Lebane also has a natural environment that everyone treats. It is located at the base of mountain Radan, which many people like because of dense forests, green hills, and orchards that you can see during a walk. This mountain is famous for its numerous mysteries and secrets, so the legend is used to find the grass against the snake's poison, the water that flows uphill and the village built of semi-precious stones. There is also the Devil's Town, a locality in Serbia that has been nominated for the new world wonder of nature.
Show more