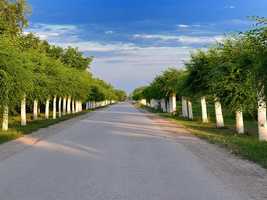 Belo Blato is a place in Vojvodina, in the wider area of ​​Zrenjanin. It was first settled in 1866.  when it was inhabited by the Germans who called the village Eisenheim.  Because of the great flood that occurred in 1876.  Germans emigrated to Romania. In 1883.  colonization was re-declared and the village was populated by Slovaks from Padina (180 families).  Later, the Hungarians, Germans, and Bulgarians arrive in Belo Blato (Slovak - Lizika). Thanks to a mix of different cultures, customs, and even gastronomic habits, inhabitants of Belo Blato are known for delicacies of meat and milk. There is no house in this village whose hosts do not know how to make good sausages, hams, bacon, and other delicacies.  That is why, once a year, in February, the traditional manifestation of "Sausage making" is held in Belo Blato, which attracts more than a thousand visitors each season.
Show more