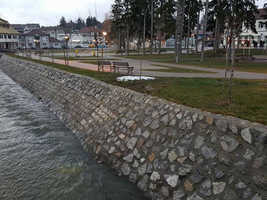 The city of Sjenica is located in the south-west of Serbia, surrounded by mountains from all sides, which created problems in the past because of the snow. Today, you can come to Sjenica from all parts of the world and enjoy its attractive areas. But, it still is one of the coldest cities in Serbia. Throughout history, this town was an important station on the Drina route to Dubrovnik, and even had one castle during the time of Nemanjic, the most important Serbian dynasty. Many people say that Sjenica and neighboring city Novi Pazar are the best cities to experience the touch of the orient that's rooted in the Serbian tradition. One of the orient places was the former city fortress, that is currently planned to be rebuilt. This historic building, which also had a mosque within, was built in the 17th century and it is the most important object of the cultural heritage of this city from the Ottoman period. Over time, it was repeatedly damaged, and the whole complex with the mosque was completely destroyed after the end of the Second World War. On the territory of Sjenica municipality are four reserves and nature parks, among which unique Uvac stands out. It's protected by the state as an area of exceptional importance. Apart from the sight of the Uvac canyon from a breath-taking viewpoint, Uvac also offers a rich fauna, primarily birds. The most famous one is Griffon vulture - the largest bird that exists in Serbia. Association for this city is often the famous Sjenica cheese - one of the best cheeses of the entire Balkan. And also you need to try lamb from Pester or jardum (specialty of sheep milk). In the end, it is known that in Sjenica all the senses are satisfied, which makes it an inevitable destination for a visit.
Show more