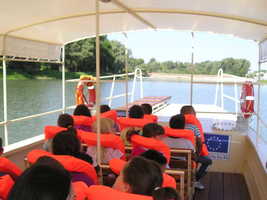 Apatin, one of the most beautiful towns in the north part of Vojvodina, on the left bank of Danube, and it occupies the space of 350 km2. Danube-Tisa-Danube channel is only 3km away from this municipality. The first mentioning of Apatin in a written document is in 1011. In 1417, Apatin is mentioned as a property of Stefan Lazarević, who was crowned as the Despot of Serbia in 1402. At the end of the 17th century, it became part of the Habsburg Monarchy. In 18th and in the first half of 19th century Apatin was experiencing great economic growth, due to trade, craft, shipbuilding, and banks, saving banks and brickyards were getting open. Major buildings in Apatin include the new Orthodox Christian cathedral, the Catholic church of The Assumption of Mary (built in the 18th century), the Apatin city hall, and the Speiser mausoleum. Apatin has a popular tourist location, and because of its proximity to the Danube river and the forests, it is gathering place for fishermen and hunters. There is also an annual gathering called Apatinske ribarske večeri (Apatin Fishermen Nights), which has taken place for the last forty some years. Ribarske večeri usually starts on July 1 and lasts five or seven days
Show more