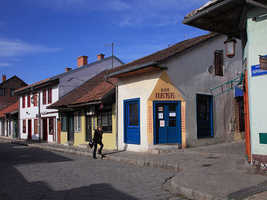 Valjevo is one of the most attractive towns in western Serbia. Its appeal comes partly from the historical monuments in its interesting old quarters and partly from the hill and mountain rivers that sneak well into the town, heralding its strikting surroundings. Though the tourist infrastructure is good here, Valjevo retains its spontaneity with plenty of old kafanas and restaurants with honest home cooking. Valjevo lies in a position of outstanding natural beauty: there are no less than five waterways at the foot of the wooded hills supplying the town with fresh air at all times. The oldest part of Valjevo is situated on the right bank of the Kolubara River under Vidrak hill. This is Tešnjar, the old trading quarter, one of the most picturesque in Serbia with its cobblestone streets, traditional 19th c houses. From Tešnjar one can climb up Vidrak hill to the park surronding the colossal monument to Stjepan Filipović. Valjevo’s National Museum was established in 1951. Museum is located in the center of Valjevo on the edge of the pedestrian zone. This building now houses central permanent exhibition “Valjevo: the third dimension of the past – a look from the future”. The main, central permanent exhibition “Valjevo: the third dimension of the past – a look from the future”. Prince Miloševa Street is the center of the city's events, it was created as a counterweight to Oriental Tesnjara. Prince Miloševa Street has also become a place for many cultural and artistic events that are not missing in Valjevo.
Show more