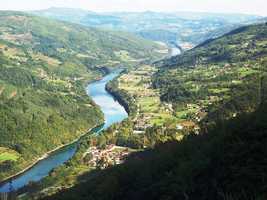 The Drina River belongs to the Black Sea basin and is formed by the merger of the Tara and Piva rivers near Scepan Polje (altitude 470 m). The catchment area includes the southwestern and western parts of Serbia, the northern part of Montenegro and the eastern part of Bosnia and Herzegovina. Its direction is from south to north and there are many tributaries. Larger tributaries from the left side are Sutjeska, Bistrica, Prača, Drinjaca, and Janja, and on the right: Cehotina, Lim, Rzav, Ljuboviđa, and Jadar. The Drina River is the largest tributary of the Sava River into which it flows near Sremska Raca. The most beautiful and longest canyon is from Zepa to Klotijevac. The width of the river is from 15 m at a place called Tijesno, up to 200 m near Perucac and Zvornik. The major cities through which the Drina flows are Foca, Goražde, Visegrad, Bajina Bašta, Zvornik, and Loznica. The wild power of the Drina River is tamed by dams and lakes (Visegrad, Perucac, Zvornik), which has damaged but not destroyed the beauty of its canyons.
Show more