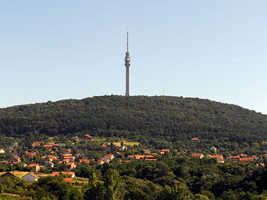 Avala is a low mountain located 16 km south of Belgrade, between the Sava and Danube basins.  It is 511 meters high (the peak of Zrnov) and rises about 200 m above the surrounding undulating terrain.   The mineral Avalite was named after Avala on which it was found. The City Assembly of Belgrade declared Avala a protected natural asset with a total area of ​​489 hectares in 2007.   It was Prince Milos who made the decision to build and protect Avala, and in 1936. the area was declared a national park. There are about 600 plant species in the protected area, some of which are natural rarities. The Avala is well-wooded with wild trees, and is partly under pine trees.  It is one of Belgrade's favorite picnic area. On Avala mountain, there is a monument to the Unknown Hero, made in 1934 by the sculptor Ivan Meštrović in the form of a mausoleum with caryatids representing women in traditional costumes from all Yugoslavian regions. In the immediate vicinity is a Monument to Soviet War Veterans who died there in a plane crash 19.  October 1964. In 1965 the Avala TV Tower was built according to the project of the architects Uglješa Bogunović and Slobodan Janjic.  The tower was demolished in the bombing of NATO forces 29.  April 1999.  It was renovated in 2010.  Nowadays, it looks almost identical to the original one, only a meter taller than it.
Show more