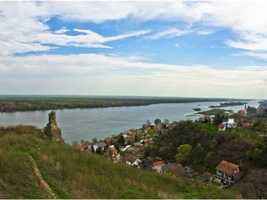 Old Slankamen, the oldest spa in Vojvodina, is located at the point where the Vojvodina units (Srem, Banat and Backa) meet. To be more precise, it is located in the mouth of the river Tisa in the Danube. The area of Old Slankamen was inhabited already in the Roman era, and later many nations passed right through it. Later in history, this place became a witness of the Battle of Slankamen in 1691, and just with that battle, the Great Turkish-Austrian War was finally over. At the place where the battle was, you can visit a monument with the verses of the famous Serbian poet Jova Jovanović Zmaj written on it. Another treasure from the history that this town preserves is the archaeological site of Gradina, which was inhabited from prehistory to the late middle ages. The most important remains are the ones from the fortification from the Roman era. However, this little town is most famous for their medicinal properties – healing water. The spa that exists here has been developing since the Turkish era, and modern development began in the 1960s. Beside medicinal and historical treasures, this place has a river that is rich with fish, so it is perfect for all fishing lovers. Wine lovers can find a vineyard on hills above this town. They all face Danube and the tradition of cultivating the vine lasts over two millennial. Today, the winegrowers make high quality international varieties of wine here. It is interesting that, within one of the wineries, named Acumincum, you can see the remains of a Turkish hamam (bath), the salty bathroom.
Show more