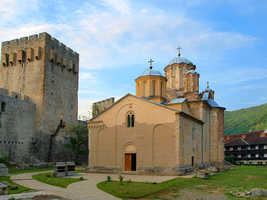 The Manasija or Resava Monastery is one of the most significant monuments of Serbian medieval culture and the most significant building belonging to the so-called "Moravian School".  It is located about 30 km from Despotovac. The monastery is the endowment of the despot Stefan Lazarevic. Its construction began in 1407 and was completed in 1418.  The monastery church is dedicated to the Holy Trinity and is consecrated to the feast of the Holy Spirit.  The entire complex is surrounded by defensive walls.  It was a fortified whole consisting of a total of 11 towers, one of which stood out the lower tower, better known as the Despot Tower.  Although only a third of the frescoes in the monastery have been preserved, Manasija's painting is one of the greatest achievements of medieval painting. During the reconstruction of the monastery church at the beginning of the 21st century, earthly remains were discovered, which the archaeologist Marin Brmbolic, the head of those works, considers to belong to Despot Stefan. DNA analysis of these remains confirmed that it was Prince Lazar's son. The monastery complex is a cultural monument of great importance.
Show more