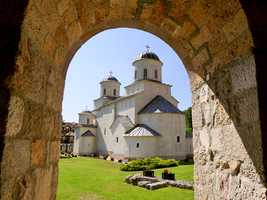 The Mileševa monastery was founded between 1234 and 1236 by Serbian King Vladislav. The monastery is situated in a valley of the Mileševa river, near Prijepolje. It is considered as one of the most important Serbian sanctuaries and spiritual centers and was ranked second popular among Serbian monasteries, immediately after world-known Studenica. In 1236, the relics of St. Sava were transferred here from Trnovo (and from here, at the end of the XV century, they were taken to Vračar where they were burnt. Saint Sava was a founder of the Serbian Orthodox Church and the greatest Serbian saint. In 1377, Stefan Tvrtko Kotromanić was crowned here as the „king of Bosnia and Serbia“. The monastery was set on fire and robbed many times by the Turks, but it was also renovated „thanks to people, and the help of Russian emperors, Romanian, Vlach, and Moldavian princes“. The last renovation, when the church got its present appearance, was done in 1863. Mileševa is famous for many things, but probably mostly for its fascinating fresco painting. The admirable White Angel fresco, part of the World Heritage and one of the planetary symbols of peace, can be also seen on the wall of this stunning monastery. It is also considered that the portraits of Nemanjićs in Mileševa not only have an extraordinary artistic value, but they also are closest to the real looks of the portrayed people. The whole area around the Mileshev Monastery is of particular natural, cultural and historical importance and almost all the tours leading to this area include a visit to it. Because of all of these fascinating facts, this monastery stays among the top three destinations on the must-see list both of foreign and domestic tourists.
Show more