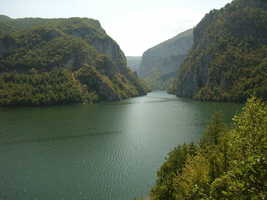 Lim is a river that flows through Montenegro, Serbia and Bosnia and Herzegovina, where it flows into the Drina. It originates from the Blue Lake in Montenegro and flows into the Drina River between Goražde and Visegrad. Two hydropower plants were erected on it, Potpeć and Bistrica, between which is Potpeć Lake situated. The river itself forms a composite valley in which gorges and valleys alternate, and the area around it is called Polimlje. It is known for its cultural and historical monuments from the time of Stefan Nemanja, his brothers, and descendants. The most famous of them are the monasteries of Mileševa, Đurđevi Stupovi, Davidovica, Kumanica, and St. Nicholas, and one Jerina's city rises above the river canyon. Today, the river is known as one of the most attractive for rafting, which has made it a very attractive tourist destination
Show more