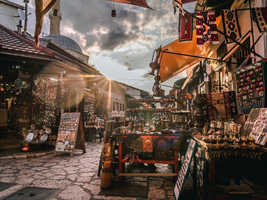 Sarajevo is the capital of Bosnia and Herzegovina and its largest urban, cultural, economic, and traffic center, the capital of the Federation of Bosnia and Herzegovina, and the seat of the Sarajevo Canton, which is estimated to have 688,354 inhabitants. The river Miljacka flows through the city, and in the immediate vicinity of the city is the source of the river Bosna, with the popular resort of Sarajevans, Vrelo Bosne. Around the city are the Olympic mountains: Jahorina, Bjelasnica, Igman, Treskavica, and Trebevic, which are especially during the winter months a favorite resort of Sarajevans and tourists from around the world.
Show more