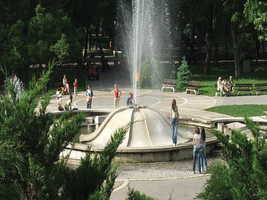 Niška Banja Spa is a pleasant oasis of greenery and rest located only 10km east from the center of Niš. The spa is the third most popular spa in Serbia. The spa has two hot and one cold spring, all with a slight radioactive component. The place is also noted for a pleasant climate, notably warmer then Niš and with much lower rain fall than average. The spa was first used by the Romans, who had several large bathing facilities here. The ruins of the Romans were later used by the Turks. The spa changed its appearance between the two World Wars when wealthy merchants from Niš and Belgrade were attracted by the healing reputation of the springs and built many impressive villas here. Today Niška Banja is open to other forms of tourism. There is a large hall ideal for holding various congresses, and natural conditions favor recreation and sports preparations. Near the spa, tourists can visit two gorges, numerous picnics, monasteries, archaeological sites and use numerous sports fields.
Show more