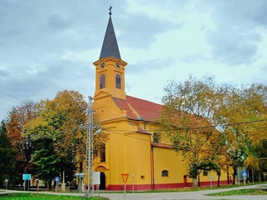 Bački Monoštor is a village located in the Sombor municipality, in the West Bačka District of Serbia. It is situated in the autonomous province of Vojvodina. Bački Monoštor is located on a small peninsula surrounded by the Danube backwaters and channels that can be reached only by passing over the bridges - hence the name "Village on the 7 Danube." A bridge is placed at the entrance to the village from the direction of Sombor - the so-called "Pislin bridge" which is on the Grand Bačka Canal, the other is at the entrance to the village from the direction of Bezdan - pontoon bridge, also over the Grand Canal and the third is placed at the southwestern side of the village over Canal Danube-Tisa-Danube, so-called "Gypsy bridge" that connects Bački Monoštor with his woods and cottage settlements. As for coming to Bački Monoštor by water, it is the most attractive because it offers the possibility of enjoying the countless beauties of nature and the surrounding villages. In the past, the not so distant, Bački Monoštor had a so-called Danube port for barge and small boats. With the arrival of modern times, regulation of the Danube river channel and construction of defensive embankments for flood protection, the village has temporarily paralyzed the flow of the Danube, so called. Here is located one of the branches of the Danube, called Dunavac, which is now somewhat farther away from the village.
Show more