You will get an unforgettable experience in this unique untouched Nature Reserve near the city of Belgrade.

Departure time: by arrangement with the tour participants.

Place of departure: Sava Boat Restaurant under Branko's Bridge in New Belgrade, across from the Museum of Contemporary Art.

After boarding, the welcome that your host will wish you, the boat captain who will give you VIP treatment while sailing and be at your service all the time. We will sail towards the mouth of the Sava River into the Danube, where you will see the place where the Sava River, the longest river in the Balkans, ends and flows into the Danube, which for centuries is the link between Europe and the Middle East. From there, we sail slowly to Great War Island, which represents the great natural value of Belgrade. In addition to being a Great War Island and a protected IBA area because of the rare species of breeding birds that inhabit it, it is also the place from which many conquerors in the past commanded the liberation and conquest of Belgrade. It has many interesting stories and urban legends to hear from your captain.

After the Great War Island, intersecting the waves of the Danube we continue towards Zemun, Zemun Quay, and Gardoš - the old part of Zemun. Until 1918, Zemun was a border town in Austria-Hungary, from which passengers from Europe arrived from Belgrade and Serbia and from Zemun used to travel to Europe. Due to its geo-strategic position and the importance it had, it was economically developed, which is testified by the many architectural values ​​that we will see from the river today, and which tell their story of times past. The Gardoš tower in Zemun is of particular interest because it is a testament to the power of the former empire (Austro-Hungary), which was built as an eternal reminder of the 1000th anniversary of statehood and the affiliation of these regions to Hungary.

When we pass Zemun we continue our sailing upstream through the calm waters of the Danube to the natural attraction and the hidden pearl on the left bank of the Danube, Beljarica or better known as Belgrade Amazonia. The swampy area of ​​the Belgrade Amazonia, which is hidden on one side from the main navigable corridor of the Danube and on the other hand, while isolated from the mainland again in isolation, fully gives you the experience of a separate world dominated by nature. Many protected species of birds have their habitats here, such as white-tailed eagle, white stork, black stork, common mousebird, swan humpback, owls… In addition to this, the area is also inhabited by bats, wild cats, jackals, otters, squirrels, kunas, blind dogs ... The spawning ground here has 29 species of fish. Sailing through the Belgrade Amazon will give you an experience of unspoiled nature and wilderness, just a few miles from the million metropolia, which is a challenge and adventure.

After a tour of Beljarica, we return downstream and head for the Danube Alas Fish Restaurant, located in a fantastic natural setting, where you will taste local fish specialties with a rich selection of quality wines with a geographical origin.

During the voyage, if you are in the mood for swimming, your host will take you to a place that is specially selected for privacy and gives you a sense of complete freedom for your water activities.

We end our sailing and tour at the place where we started with the desire to meet again on the Danube.Tour lasts 5 hours,every next hour is charged 30 .eur.

It can be canceled for free at the latest one day before departure. Cancellation: The tour will be canceled in case of extremely bad weather.

Private boat, capacity up to 8 persons. The organizer of this ride specializes in exclusive boat trips for individual tourists who want personalized tours fully customized to their wishes and interests. This type of tour is for people who expect a high level of freedom, attention and service from the beginning to the end of the tour.

Special wishes, snacks on board, ... specify in the comment when booking any additional requests. Realization by appointment.

Tour reservation: Discover the secrets of the Danube and Belgrade Amazon - a private tour 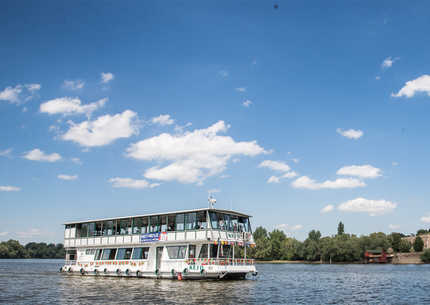